Breakfast, the most important meal of the day

It’s true. After waking, perhaps 8 to 10 hours after last eating, breakfast gets the body going and fuels you for the day to come. It starts the metabolism and reduces the chance of craving carbohydrate snacks later in the morning. Throughout September Better Breakfast Month promotes the benefits of a healthy start to the day.

The science behind breakfast is quite conclusive. The National Health and Nutrition Examination Survey (NHANES) was a comprehensive review of over 4,000 adults of all ages and showed the benefits of a good breakfast.

For example, the body mass index (BMI) of a woman who eats breakfast is under 25.  This is almost 2 points under the national average. Missing breakfast is not good for your health and is not an effective weight loss strategy.

Experts such as Katherine Zeratsky confirm what many suspect, that eating a proper breakfast is a good way to avoid overeating at other times during the day, it gives you a little more energy meaning you will feel less sluggish mid-morning.

She also notes that those that eat a nutritionally balanced breakfast are more inclined to undertake physical activity.

Breakfast is an all-round winner and it’s why Better Breakfast Month is promoted.

The UK and USA have similar tastes in breakfast. Meat, often pork, eggs and toast, waffles or pancakes are among the most popular foods on both sides of the pond.

Look a little deeper however, and there are some differences in the way a breakfast is prepared and certainly in the terms used to describe the food. 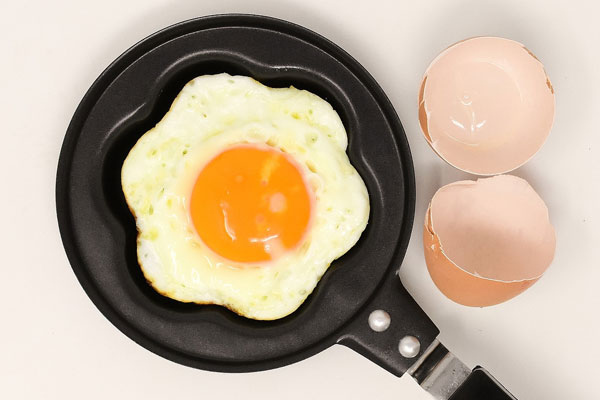 This is a term common in the USA but it’s not used to describe how you’d like your eggs cooked  in the UK.

It’s actually quite a descriptive name. Over easy means the eggs are flipped over towards the end of the cooking process. Most of the cooking is done with the yolk uppermost, then about 90% of the way through the cook, the egg is flipped and given a short time yolk down.

There is an “over hard” option as well. Easy and hard refers to the softness of the yolk. As you might expect easy is a soft, runny yolk and hard is a firm yolk.

If you haven’t tried them before, celebrate Better Breakfast Month with eggs “over easy” just to see what it’s like!

Ham and Eggs or Bacon and Eggs

While the basic ingredients are the same, the cultural divide between the USA and UK is best noted in the way the ingredients are prepared. It is rare in the UK for the pork part of an F.E.B (Full English Breakfast) to be anything other than bacon or sausages – or both. The bacon is, as you might expect, thin cut and often smoke cured.

Regionally, the USA has a great deal more variation with Ham and Eggs.

The Ham might mean bacon, it could also mean cold ham slices, an egg and ham mash. It might include thick cut ham or even gammon.

On both sides of the Atlantic the eggs come in a variety of ways. Scrambled, fried or poached being the most popular.

How to Know Ham or Gammon is Cooked

In the USA there are some specific guidelines regarding the cooked temperature of ham and gammon including the requirements for safe re-heating of these meats which might be handy to know for Better Breakfast Month.

Cook all raw fresh ham and ready-to-eat ham to a minimum internal temperature of 145°F (62.8°C) as measured with a food thermometer before removing meat from the heat source and allow to rest for at least 3 minutes before carving or consuming.

In the UK, for thicker cuts of ham, bacon or gammon it is suggested that the internal temperature reaches 75°C (167°F) for a minimum of 30 seconds.

There is no visual or olfactory way to be sure you have cooked your ham or gammon properly. The only safe way is to use a properly calibrated thermometer.

Take a look at Comark’s range of meat thermometers and the recommended cooking temperatures here.

Sausages are a breakfast staple. The protein staple of many breakfasts either plated with other breakfast strapless like eggs, or in a sausage sandwich.

Sausages are typically grilled or fried but the method of testing that they are cooked is the same. Using a meat thermometer and pushing the probe into the middle of the sausage – preferably the fattest part of the meat and into the centre.

You are looking for a temperature of 160 °F (71.1 °C) degrees centigrade sustained for at least 30 seconds.

The colour of the meat is not a good indicator. You might have read or heard that you should cook a sausage until it is not pink inside. This method is not accurate. Some sausage mixes remain pink well after they are cooked, while other sausages are not pink inside to begin with. A meat thermometer used correctly is a fast and safe way to know for sure.

Early morning can be a rush. Work, school and a digestive system that has been dormant for many hours that often leads no little or no sense of hunger.

We all know though that this hunger comes on strong only an hour or two later. For many, this leads to snacking on salty or carbohydrate filled snacks.

Making time for breakfast and getting your metabolism running in the morning is a great way to start the day.

Have a great Better Breakfast Month.