In June 2015 Smith & Wollensky opened their first restaurant outside of the US – located in the landmark Adelphi Building in London. Their steaks are USDA Prime, dry-aged and butchered on-site, making them the only steakhouse in London which offers a cut of meat that combines all three.

Tom Cook has been a chef for over 22 years, working alongside some greats such as Gary Rhodes, Michel Roux Jr, Eric Chavot, Daniel Clifford and Tom Aikens. Cook is now Executive Head Chef at Smith & Wollensky.

I’d say cooking with my Mum really, just doing things in the kitchen with her, whether it be little cakes or stuff like that. I just loved being able to literally get your hands stuck in and mixing stuff with my hands, licking the cake bowl etc…which, funnily enough, my son does now.

So, when did you first get into cooking?

At that point I never thought of doing anything like what I do now, that was never on my mind. Whilst I was at school still, I was 14 years old, I just wanted some extra cash in the school holidays, so I went to a local hotel – back in Harlow – and got a job as a pot washer. I enjoyed working there and then one day one of the chefs didn’t turn up and chef said do you want to earn 50p more an hour to do the veg? Of course, more money, so I was there….and never really looked back. I loved the buzz of being in the kitchen, doing service and just learning about food. There’s just so much to learn – I’m still learning today.

What’s been your biggest food revelation?

Wow, tough question. I think it comes all the time. You’re always discovering something different. In the job I’m in now, the revelation has been realising that to really wow people doesn’t necessarily mean putting twenty preparations on a plate. You know, we just serve some steaks – and that’s all some people have – and they say it’s the best meal they’ve ever had. I’ve seen both sides of the spectrum. I’ve worked in a Michelin starred restaurant putting so many different items on the plate – and that is amazing, don’t get me wrong, there are amazing dishes out there for that as well – but it’s really about what the product is and how you cook it, treat it…the whole process. It could be one single item done perfectly and they could enjoy it as much as the twenty items on a plate.

Who would you most like to cook with and why?

I’d love to cook with Pierre Koffmann. I think he’s a stand-out name in the industry. I’ve personally never worked with him, but worked with people who have worked for him so kind of have Chinese whispers of what he did if you like. A completely legendary chef, very well respected and I’d love to see him in action.

…You have worked with some great names…

I loved working with Michel Roux Jnr, he’s a great guy, quite a calm guy. I certainly look back on the way his attitude was in the kitchen and the respect he commands – but doesn’t really lose it ever in a kitchen scenario. I definitely take inspiration from him.

It’s predominantly all about the steaks. We’ve got our own in-house butcher and we’ve got our own ageing room – which is quite a rarity in the restaurant scene nowadays.

Everybody kind of buys in portioned meat – they seem to have lost the skill of butchering, prepping fish – everything already comes cut up for you, you’re just taking it out the bag and just cooking it – whereas we’re getting whole joints directly from America and ageing them ourselves in-house, so we’ve got complete control of what we do. That’s a real massive part of what we’re focused on.

When you eat a steak, you’ll definitely feel the difference from other people down the road. Don’t want to mention other steak-house names, but I’ve eaten in them … I’m obviously biased but a lot of people are saying we’re doing the best steak here than so many other people in town – and I believe that’s true.

… And how does temperature measurement fit in with that ethos?

Temperature is ultimately important.  I think that, twenty years ago, chefs didn’t really pay much attention to it and it’s really come to the forefront in the last twenty years of cooking. Throughout my career it’s become more and more about having temperature probes, water baths and rational ovens where you can control the temperatures of what you’re doing. It’s so important to make the product the best it can possibly be and we are trying to serve the perfect steak –  there’s no margin for error.

We don’t want people to be disappointed when they receive that steak, so we use temperature probes to make sure they’re at the right cooking point. Also, we don’t want to waste the animal itself, having to cook another steak for a client.

“We’ve got one of your handhelds – It’s the more accurate one so it’s the one we give to the guy on the steak section!” 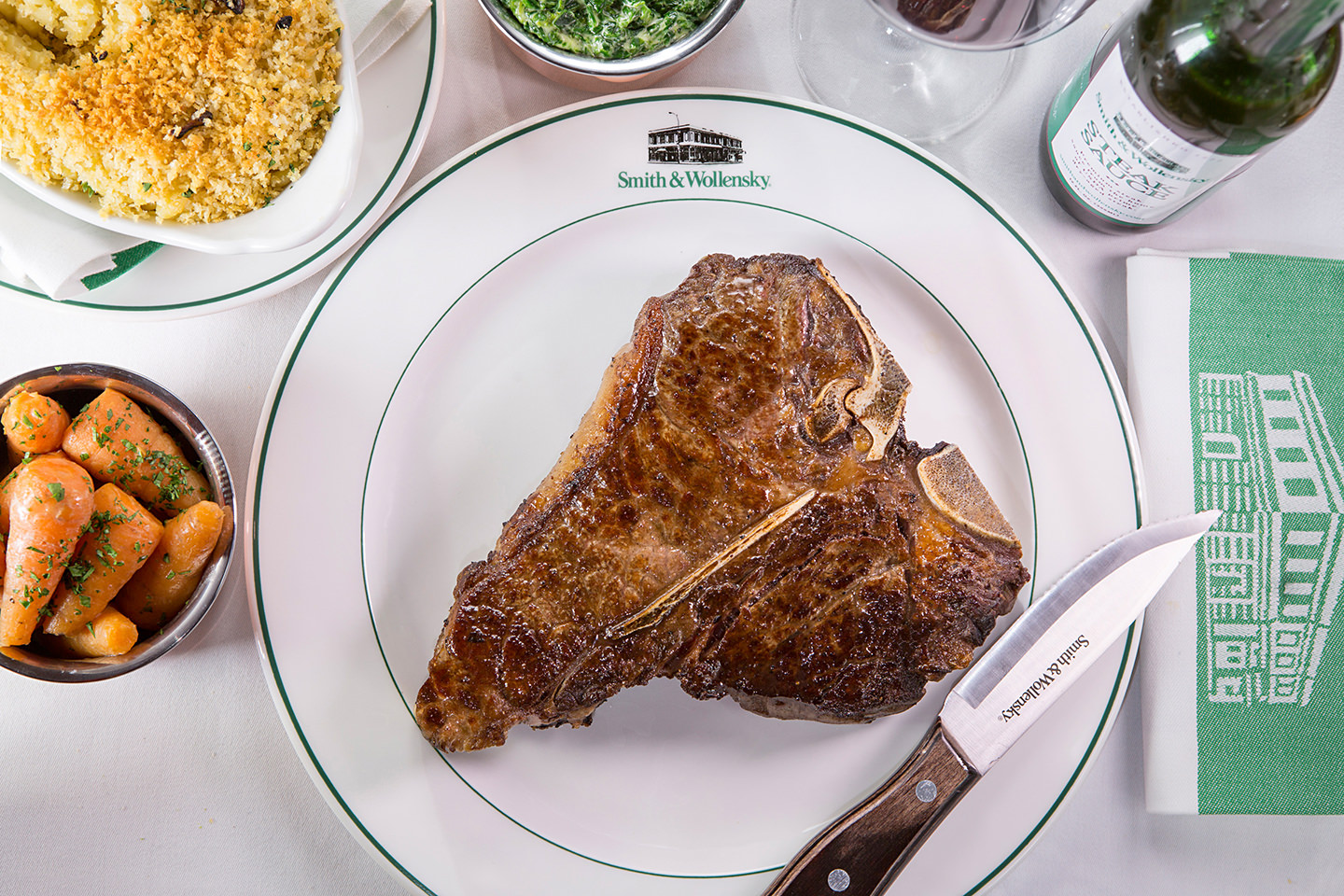 So what are your top tips for cooking that perfect steak and cooking it consistently every time?

With our bigger cuts we take them out of the refrigerator at the start of service, we have a few of each, so they just rise in temperature slightly.

Then a really, super-hot pan – if you’re cooking at home a griddle pan or a non-stick pan, a griddle pan might be slightly better. Get it super-hot, as hot as your stove can make it – maybe open a window to get rid of the smoke (unless you’re lucky and have a nice sunny day in which case you can do it on the barbecue) and then get a nice char to the steak. That’s the key to getting a lovely flavor to it. A super-hot pan, so you’ve got, not burnt but, a very dark color to the outside of the steak.

If you’ve left it out to room temperature, by the time you’ve seared the steak the whole way around it’s probably almost medium rare at that point. It’s the flavor that people are craving. There’s very few people who don’t want that kind of char-effect on it. It’s really part of the flavor everyone expects.

I’ll let you into our secret of what we do with steaks here. We’ve got a char-broiler downstairs, which is the American version of how we cook steaks. It’s gas-powered and you can get a nice char on the steaks. Once we’re about to serve the steak we put some of what we call ‘love’ on it. That’s rendered down beef fat from our butchered steaks – literally more of the beef flavor going straight back on to the steak. Helping to give a moistness to it as well. A unique flavor.

What’s been your biggest challenge at Smith & Wollensky?

The biggest challenge has really been maintaining what we do. Making sure everybody who comes through the door goes away saying what a great place we are. It’s working with the whole team, be it the chefs or front of house, to ensure that happens. Good communication throughout.

It’s really just looking after the products, making sure they come out properly to the guests – and that’s from both sides of it.  It may be giving the waiter the knowledge to inform the customer what they need to know about steaks – whether it be cooking temperature, or where it’s come from.

What influences have you brought from your travels and what’s your favorite cuisine?

I would say that nowadays I really love the flavors of Asian cuisine, but more specifically Japanese. Very clean flavors, generally using amazing products. Obviously, they are famed for their Wagyu [beef] which is close to what I do nowadays. It’s an amazing piece of meat. The way it’s reared is just so amazing. It’s so well looked after. The flavors that they serve with meat like that are just so clean and simple, with very few items on the plate generally, but still a memorable dish in front of you. I take heart from that kind of cooking, it seems to have more relevance to what I’m doing.